Bombardments have intensified after Moscow illegally annexed a swath of Ukrainian territory in a sharp escalation of the war.

“In the Kupyansk district, a shot-at convoy of cars containing civilians was found. According to preliminary data, 20 people died in the cars,” Kharkiv Governor Oleg Synegubov said on the Telegram messenger site.

Synegubov put the preliminary death toll at 24 including a pregnant woman and 13 children.

“Russians fired on the civilians at close range. [They] attacked civilians who tried to escape the shelling. This is cruelty that has no justification,” Synegubov said.

In an online video shared by official channels, a senior paramedic from the Kupyansk Department of Emergency Medical Care confirmed these numbers.

Russia did not immediately acknowledge or comment on the missile attack, the second in two days to hit a humanitarian convoy. 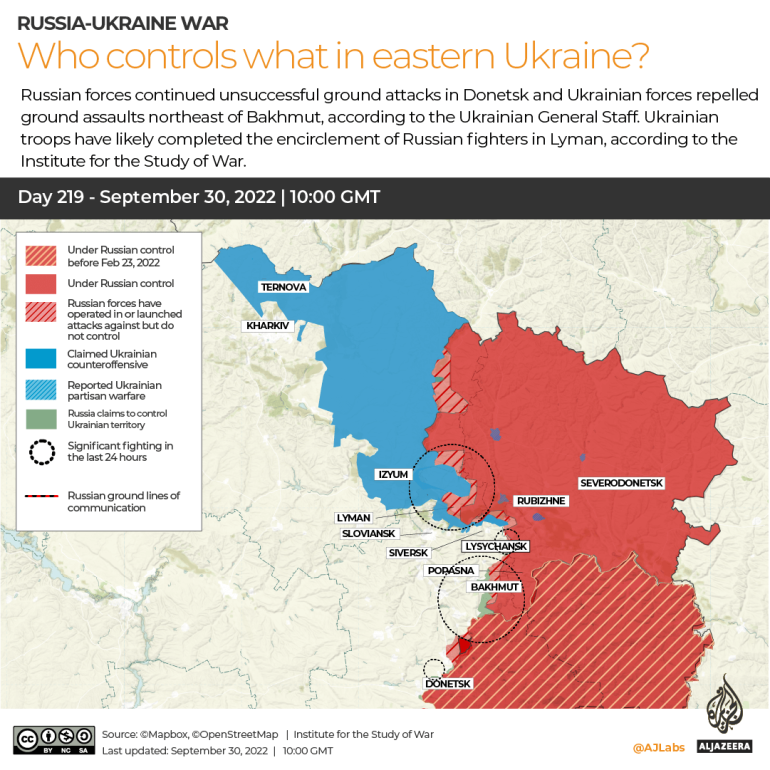 The Kharkiv region prosecutor’s office said: “On September 30 prosecutors, investigators of the Security Service and the police discovered a convoy of seven cars that had been shot.

“The car queue was shot by the Russian army on September 25, when civilians were trying to evacuate,” the statement alleged.

“Two cars have burnt completely with children and their parents inside – they burnt alive,” it said.

Ukraine said at least 30 people, including children, were killed and dozens wounded in the shelling of a convoy of civilian vehicles in the Zaporizhia region on Friday.

Russian troops have retreated from much of the Kharkiv region after a successful Ukrainian counteroffensive last month but continued to shell the area.

Amid growing international sanctions and condemnation of Russia, the counterattack that has embarrassed the Kremlin retook more ground.

“In connection with the creation of a threat of encirclement, the allied troops were withdrawn from the settlement of Krasny Lyman to more favourable lines,” Russia’s defence ministry said in its daily briefing.

Lyman, a key transportation hub, had been an important site in the Russian front line for both ground communications and logistics. With it now gone, Ukraine can push further potentially into the occupied Luhansk region, which is one of four areas that Russia annexed on Friday after an internationally criticised referendum.

Ukraine also was making “incremental” gains around Kupiansk and the eastern bank of the Oskil River, which became a key front line since the Ukrainian counteroffensive regained control of the Kharkiv region in September.

In its heaviest barrage in weeks, Russia’s military on Friday pounded Ukrainian cities with missiles, rockets and kamikaze drones.

Russia is increasingly using anti-aircraft missiles to conduct attacks on the ground likely because of a lack of munitions, the British military said.

“Russia is expending strategically valuable military assets in attempts to achieve tactical advantage and in the process is killing civilians it now claims are its own citizens,” it said.

Russia now claims sovereignty over 15 percent of Ukraine in what NATO Secretary-General Jens Stoltenberg called “the largest attempted annexation of European territory by force since the second world war”.

What will changes in the US Democratic primary calendar mean? | Elections