Residents took to the streets of the southern Ukrainian city of Kherson to celebrate Russia’s withdrawal, one of the most important military achievements by Kyiv’s forces since Moscow invaded nearly nine months ago.

Olha Pylypivna, a resident of Kherson, said she could not “find the words” to describe her relief after Ukraine’s special forces moved in on Friday. Crowds chanted “glory to our heroes” and “glory to Ukraine” as soldiers mixed with smiling civilians.

“I want to cry. There were constant explosions but now it’s so quiet … Everyone felt so strange, so scared by the silence. But you know, hearing this silence is so good,” she told Al Jazeera.

In the strategic port city located on the Black Sea, the Ukrainian national anthem rang out in the central Kherson square as a small crowd sang along while huddled around a bonfire, a video published by Ukraine’s parliament on social media showed.

“Russia is forever here”, said a poster in Bilozerka near Kherson. Well, not really!

To everyone in the world, including ASEAN where I currently am: Ukraine is gaining another important victory right now and proves that whatever Russia says or does, Ukraine will win. pic.twitter.com/8bc4JGNajX

Ukrainian President Volodymyr Zelenskyy declared Kherson “ours” after Russia withdrew troops from the city to the eastern bank of the Dnieper River.

“Special units are already in the city,” Zelenskyy wrote on Telegram, posting footage of Ukrainian troops gathered with residents.

In Ukraine’s capital Kyiv, the news was also met with joy. Wrapped in flags, popping champagne corks and belting out the Ukrainian national anthem, residents of Kherson living in Kyiv gathered in the city’s Maidan square to celebrate.

“I didn’t believe it at first, I thought it was going to take weeks and months, a few hundred metres at a time. And now we see them arrive in Kherson in one day, it’s the best surprise,” said Artem Lukiv, 41.

Al Jazeera’s Assed Baig, reporting from the Kherson region, said Moscow’s withdrawal was the “most decisive” event in this war so far.

“It’s boosted the morale of Ukrainian soldiers who say … they now believe they can win this war.” 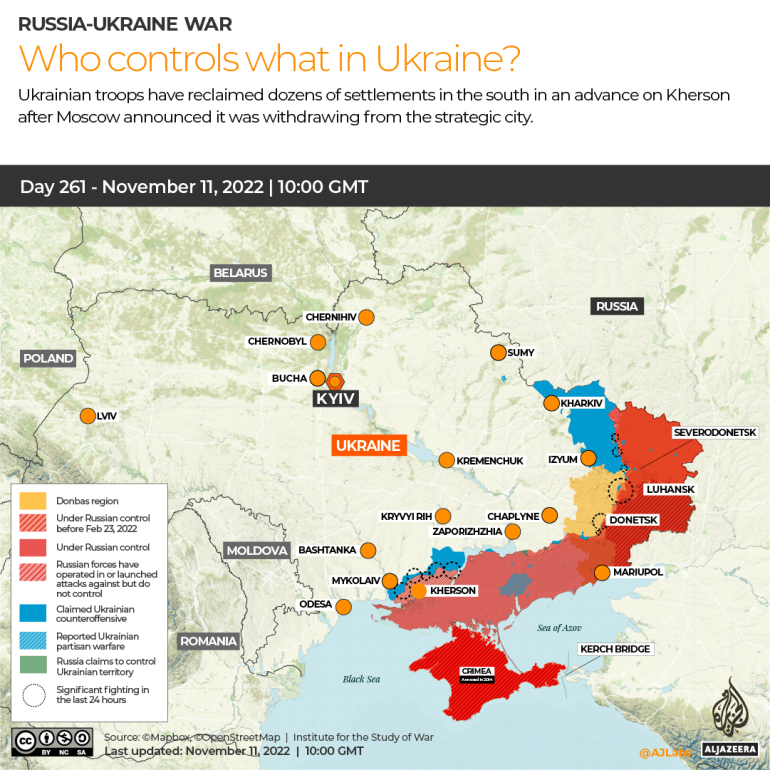 The key Antonovsky Bridge over the Dnieper River appeared to be damaged during the Russian retreat, with both sides blaming each other.

“Our troops hit the Russian forces during their withdrawal from the city when they were trying to escape using ferries in the area of Antonovsky Bridge,” said Serhiy Khellan, a deputy in the Kherson Regional Council.

“The bombing caused the destruction of many vehicles and personnel, and they also left a number of vehicles behind.”

Russia said all its soldiers and military equipment left the city safely and intact.

Zelenskyy said Russian soldiers placed mines in the city and troops will be followed by sappers, rescue workers, and energy personnel. Despite the daunting tasks ahead, “medicine, communications, social services are returning … Life is returning,” he said.

The United States hailed Ukraine’s “extraordinary victory” in recapturing Kherson from the Russians on Saturday.

“It’s a big moment and it’s due to the incredible tenacity and skill of the Ukrainians, backed by the relentless and united support of the United States and our allies,” National Security Advisor Jake Sullivan said while travelling to Cambodia with President Joe Biden for a regional summit.

“Russia’s announced withdrawal from Kherson marks another strategic failure for them. In February, Russia failed to take any of its major objectives except Kherson,” Wallace said in a statement.

“Now with that also being surrendered, ordinary people of Russia must surely ask themselves: ‘what was it all for?’”

While it appears to be a major Russian setback, the Kremlin insisted Kherson was still part of Russia and it did not regret annexing the entire Kherson region.

The full Ukrainian recapture of the Kherson region would disrupt a vital land bridge for Russia between its mainland and the Crimean Peninsula, which Moscow annexed from Ukraine in 2014.

American General Ben Hodges, former commanding general of the US Army in Europe, described the Russian retreat as a “colossal failure”. He said he expects Ukrainian commanders will keep pressure on Russia’s depleted forces before a possible future push for Crimea next year.

“It’s too early to be planning the victory parade, for sure. But I would expect by the end of this year – so in the next, let’s say, eight weeks – the Ukrainians are going to be in place to start setting the conditions for the decisive phase of this campaign, which is the liberation of Crimea, which I think will happen by the summer.”

Baig noted Russian forces still controlled a “considerable amount of territory” and had the ability to strike targets in Kherson and elsewhere in Ukraine.

“Some Ukrainians fear returning to their towns and villages because of the destruction and mines that may be left behind. This also shows that the war is far from over,” he said.

Ukraine’s Foreign Minister Dmytro Kuleba warned Kyiv still sees “Russia mobilising more conscripts and bringing more weapons to Ukraine. I understand that everyone wants this war to end as soon as possible. We are definitely the ones who want that more than anyone else.”

“The morale in Ukraine is very high. Our army will continue to liberate our territory because we are fighting a defensive war against an enemy who invaded our country. I have no doubts in the eventual outcome of this war. Ukraine will prevail – it’s only a matter of time and a price.”

‘Broke all the time’: A carpenter and coder’s monthly costs | Business and Economy