Al Jazeera’s AI robot Kashef has crunched the numbers and has some predictions for today’s game.

The second day of the World Cup 2022 semifinals will pit two-time champions and holders France against Morocco.

Kashef, our artificial intelligence (AI) robot, has analysed more than 200 metrics, including the number of wins, goals scored and FIFA rankings, from matches played over the past century to see who is most likely to win on Wednesday.

Morocco are currently unbeaten in this tournament and have stunned the footballing world – not once or twice but three times – by beating Belgium, Spain and Portugal.

On every occasion, Kashef was left stunned. The only remaining Arab and African team are now just two wins away from lifting the World Cup trophy.

Who: France vs Morocco

Prediction: Sizing up all the odds, Kashef has once again concluded that Morocco face an uphill battle. Kashef strongly favours France for the win, giving the team a 68 percent chance of ending Morocco’s fairytale World Cup run.

This still gives the Atlas Lions a one in three chance of reaching the World Cup final. Should manager Walid Regragui’s side do so, they have a 31 percent chance of lifting the trophy against Argentina at Lusail Stadium on December 18. 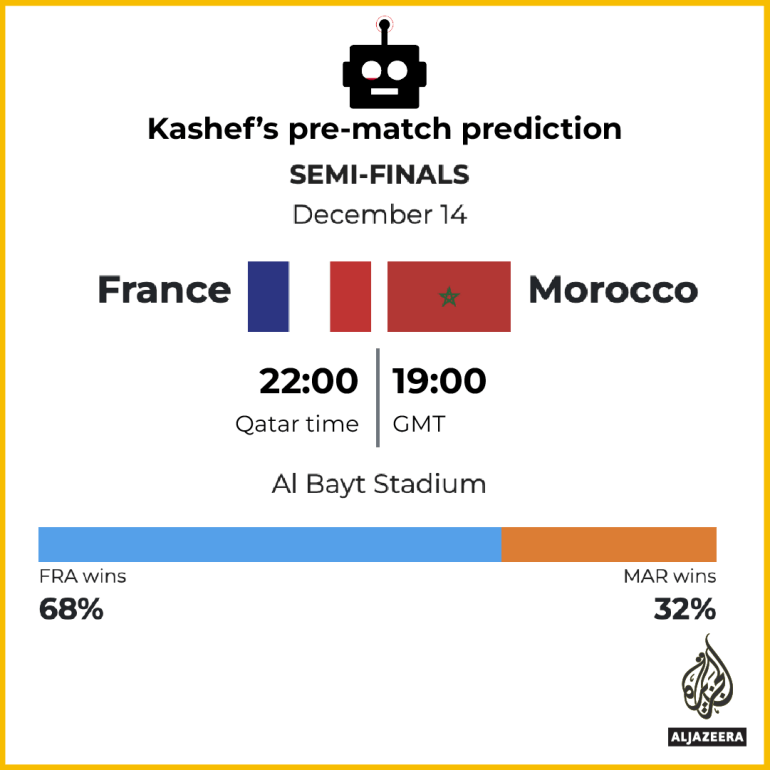 Who is going to win the World Cup?

With 61 matches completed, Kashef has a 67 percent accuracy level. Every night at 00:00 GMT Kashef reruns the predictions based on the day’s results.

Following Argentina’s 3-0 victory over Croatia on Tuesday, Kashef’s odds of Argentina clinching their third World Cup title increased by a couple of percentage points to 52 percent.

It is still anyone’s game. If France beat Morocco convincingly, that may be just enough to tip the balance in their favour.

Predicting match results is no easy task. External factors like team morale or player fitness make a big difference in how the game goes.

See if you can outsmart Kashef and predict today’s winners by playing our AI game here.

Are you football’s biggest fan?

How much do you know about the semifinalists at the World Cup in Qatar? Take our quiz below: