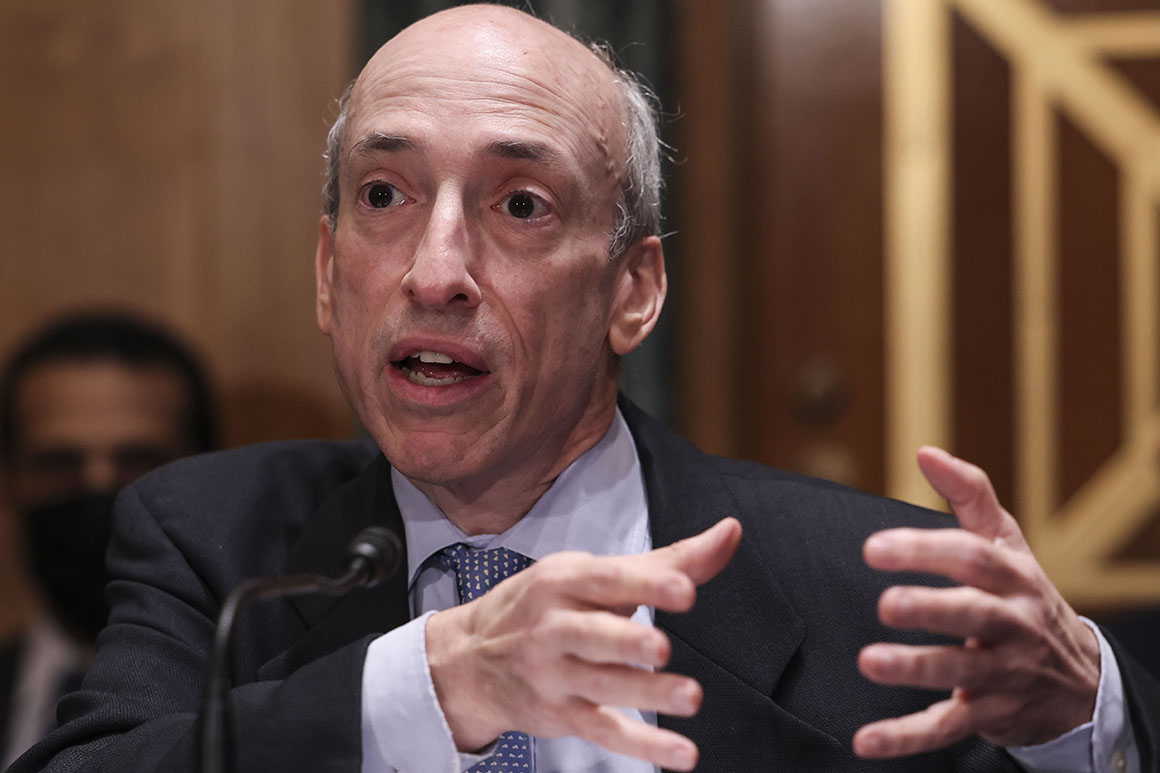 The move is stirring rare tensions between investor advocates and SEC Chair Gary Gensler, who has been long hailed by consumer groups and progressive lawmakers as a tough regulator willing to challenge the finance industry. The same groups now warn that giving individual investors a greater ability to tap into cryptocurrency is dangerous because of its lack of regulation. Gensler himself has described the underlying market as the “Wild West,” rife with fraud and abuse. It’s also prone to intense volatility, with Bitcoin’s price up 440 percent from a year ago.

“Bitcoin and other cryptocurrencies have already sucked an insane amount of money from the real economy,” said Bart Naylor, financial policy advocate at the consumer group Public Citizen. “Enabling more gambling under the banner of the SEC debases what’s supposed to be the gold standard of world securities markets oversight.”

The SEC declined to comment on the fate of the fund applications and the brewing criticism.

“We need to see where the SEC comes down on this,” said Phillip Basil, director of banking policy for Better Markets, which advocates for tougher finance industry oversight. “But we’re concerned that simply layering a new complex product over an insufficiently regulated underlying asset raises a host of investor protection and market stability issues.”

The price of Bitcoin has soared in recent days as anticipation of the approval spread among crypto traders. Bitcoin spiked to its highest level in months, trading above $62,000 as of Monday.

The proposed investment vehicles would not be made up of Bitcoin directly but would instead be linked to the market for Bitcoin futures contracts — financial derivatives that represent speculative bets on the price of the digital currency.

It comes as the SEC has held off from approving investment funds backed by Bitcoin itself, which is only lightly regulated by federal officials. While Gensler has warned that crypto markets lack adequate investor protections, another agency — the Commodity Futures Trading Commission — has policed Bitcoin derivatives since 2017.

Traders are eyeing three Bitcoin futures ETFs that will likely go live this month. A fund pitched by ETF provider ProShares was expected to start trading on the New York Stock Exchange Tuesday.

Companies proposing the funds don’t need an up-or-down vote by the SEC because they are covered by the Investment Company Act of 1940. The agency can intervene to stop an application, but if it chooses not to, the fund can move forward over a set review period, typically 75 days.

“Bitcoin and other cryptocurrencies have already sucked an insane amount of money from the real economy.”

Gensler in recent months has hinted that the agency would be open to allowing the funds to be traded. Though he stopped short of an explicit endorsement, it triggered a wave of applications.

“When combined with the other federal securities laws, the ’40 Act provides significant investor protections,” Gensler said in an August speech. “Given these important protections, I look forward to the staff’s review of such filings, particularly if those are limited to these CME-traded Bitcoin futures.” (CME Group is an exchange operator that offers Bitcoin futures trading.)

The CFTC, which Gensler led during the Obama administration, allowed Bitcoin futures to launch in late 2017 under former Chair J. Christopher Giancarlo. At the time, Giancarlo said the futures exchanges that wanted to offer the products had agreed to address consumer protection, but he also warned that the underlying crypto market was largely unregulated.

Giancarlo said in an interview Monday that the launch of funds based on Bitcoin futures rather than Bitcoin itself suggested “lingering hesitancy” at the SEC about the stability and health of the market for the virtual currency.

To be sure, the SEC is expected to continue pursuing a crackdown on crypto exchanges and digital currency products, despite its comfort with Bitcoin futures. Gensler has warned that investors don’t get enough information on how the market functions. He’s calling on Congress to give regulators more power to rein in digital asset trading, lending and decentralized finance platforms.

But critics argue that the SEC is nonetheless leaving investors at risk, even as it shields them from funds that would hold Bitcoin itself.

“There are huge questions of integrity, stability and manipulation in the underlying market,” said Tyler Gellasch, a former SEC official who is executive director of the investor advocacy group Healthy Markets. “It’s hard to see how layering on a regulated financial product on that shaky foundation is a good idea.”

COP26: ‘Moment of truth’ as world meets for climate summit