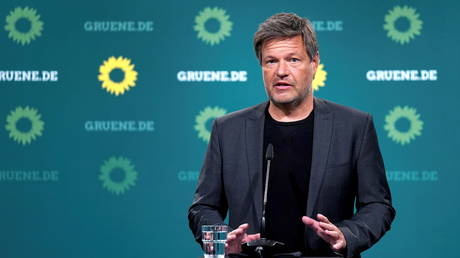 The co-leader of Germany’s Green Party, a figure likely to have a key role in Berlin’s next cabinet, has called for the incoming government to immediately begin negotiations with Russia to fix the country’s worsening gas crisis.

Speaking to broadcaster ARD, Robert Habeck admitted that Germany depended on Russia for gas supplies, and said immediate action should be taken to ensure the country could fill up its stores.

Last month, Green co-heads Habeck and Annalena Baerbock led the party to a third-place election result, and the left-wing grouping, typically so strongly against the usage of fossil fuels, will likely play a role in the country’s next cabinet.

“We are dependent on Russia, and Russia is throttling the gas supply,” Habeck said. “Our storage facilities are not full, and the demand is high. The current federal government should talk to Russia quickly so that this changes.”


Habeck’s admission that Berlin is reliant on Moscow comes despite Green Party opposition to the Nord Stream 2 gas pipeline. The controversial project was completed last month, but is not yet operating. Nord Stream 2 directly connects Germany to Russia via the Baltic Sea, allowing Moscow to send gas without transiting other countries. Berlin’s aim is to protect its energy security and make the process less reliant on third parties, thereby lowering the price.

According to Habeck’s faction, the pipeline should not yet be given a permit to operate. Nord Stream AG, its operating company, is currently in negotiations with the German government.

“Russia seems to be playing some kind of poker game with us,” he said. “But this is a foreign policy issue that the current government can at least still negotiate.”

Wild arrive late due to traffic, beat Devils 3-2 in shootout