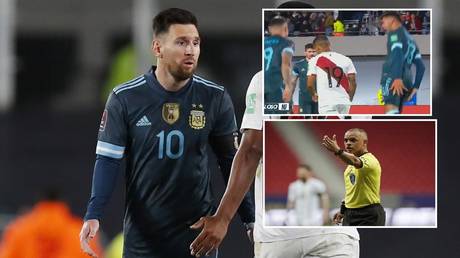 Lionel Messi has criticized a Brazilian referee who led last night’s World Cup qualifier between Argentina and Peru, as a pair of his teammates mocked a member of the opposition for missing a penalty.

With a 43rd-minute bullet header, Inter Milan striker Lautaro Martinez kept the Albiceleste on the road to Qatar 2022 and eight points clear of Ecuador trailing behind them.

Yet despite the victory, captain Messi was annoyed at how things unfolded over the course of an off night.

Venting his frustrations to his 274 million followers, Messi said on Instagram that it was a “difficult match” and “difficult to play”.

“[There was] a lot of wind, they were playing deep, leaving little space for us,” he added.

The six-time Ballon d’Or winner then shifted his attention to Brazilian official Wilton Sampaio, who booked just two Peru players despite there being 20 fouls on the home side.

“The referee always does this when he referees us, as if he does it on purpose,” Messi said, and indeed the pair have previous after Sampaio took charge of two Copa America games Argentina played on their way to lifting their first major trophy in 28 years at the Maracana this summer.

“But well, three important points and we’re close to our objective,” he finished.

This is not the first time that Messi has criticized officials in South America.

Following a semi-final exit to bitter rivals Brazil in Belo Horizonte at the 2019 edition of the Copa America that the Selecao went on to win, he accused the referee of the 2-0 loss, Roddy Zambrano, of bias towards the hosts.

“They were not better than us. They found the net early and the second goal came from a penalty they didn’t award,” Messi scathed.

“The officiating was crazy. There were clear penalties, on Nicolas Otamendi, on Sergio Aguero.

“He [Zambrano] was on their side,” Messi stated.

Lionel Messi has been handed a three-month ban from international football for accusing South America’s governing body CONMEBOL of “corruption” during the Copa America. He’s also been fined $50,000. pic.twitter.com/loCQjpCku1

“In every divided ball or dispute, he inclined the pitch their way. It’s not an excuse, but the truth is that, in this Copa, they kept on blowing for stupid things, for handballs, penalties.

“But today, they didn’t even go to VAR when there were clear plays that should have been looked at,” concluded his rant, for which he received a three-month ban and a fine of $50,000.

In the 65th minute, Peru were awarded a penalty that if scored could have sentenced their opponents to an unwanted fifth draw.

Emiliano Martinez and penalties.There was Mina at the Copa America, Bruno Fernandes in the Premier League & now Yotun in World Cup qualifying.Yotun smashed his spot-kick effort into the crossbar.#WCQ#ARGPERpic.twitter.com/HO1PldlZi9

Different to July, this time the two-time World Cup winners didn’t need to rely on Emi Martinez’s heroics to save their blushes.

Fluffing his lines, Yoshimar Yotun clipped the crossbar from 12 yards out.

And while this was pretty run of the mill, the reaction of defenders Nicolas Otamendi and Cristian Romero has since gone viral.

The pair ran up either side of the spot-kick misser, openly mocking him with laughter.

Then, they jumped up in perfect sync before returning to default mode and heading back into their positions for the relaunch of play, in a move some dubbed “disrespectful and unsportsmanlike”.

It ain’t sth to cheer about. That was so disrespectful and unsportsmanlike. Ain’t Yotun a human to fail a penalty? Many of the best worldwide soccer players have missed one many times! Why couldn’t he? Peru’s always supported Argentina. We didn’t deserve that kind of “reaction”

“I’ll be watching the World Cup carefully…Who laughs last laughs better,” said someone else, suggesting that the footballing gods might catch up with them.

“I don’t like it, it was unnecessary… so remember karma will come,” was another comment along similar lines.

“Synchronised sh*thousery should be in the Olympics instead of Synchronised swimming,” a separate, more impressed party demanded.

The economy is great, but voters don’t believe it