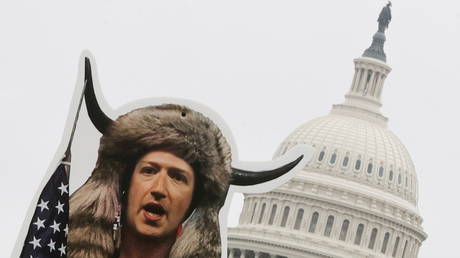 A former Facebook data scientist, responsible for censoring “dangerous” and “misleading” information during the 2020 US election, has all but accused the social media giant of facilitating the January 6 “insurrection.”

In the ‘60 Minutes’ interview with CBS on Sunday, Frances Haugen came forward as the whistleblower behind a recent WSJ investigation and a Senate hearing. But while the Tuesday subcommittee grilling, titled ‘Protecting Kids Online’, will be focused on Instagram’s effect on the mental health of teens, in her interview Haugen touched upon other aspects of how unregulated Facebook poses a danger to “democracy.”

Facebook whistleblower Frances Haugen says Facebook turned on safety systems to reduce misinformation during the 2020 Election. But she says many of the changes were temporary. Facebook says some of the safety systems remained. https://t.co/pwJ8R4RFLxpic.twitter.com/APKtjIGblL

Haugen, 37, was recruited into Facebook’s Civic Integrity unit back in 2019, and gladly joined because she herself “lost a friend to online conspiracy theories.” She had helped battle misinformation during the US presidential elections, but the moment Facebook rolled back its safeguards became a turning point when she told herself: “I don’t trust that they’re willing to actually invest what needs to be invested to keep Facebook from being dangerous.”

As soon as the election was over, they turned them back off or they changed the settings back to what they were before, to prioritize growth over safety. And that really feels like a betrayal of democracy to me.

Also on rt.com
Facebook censors those who spread ‘misinformation,’ but looks the other way while pimps abuse children


“Facebook has realized that if they change the algorithm to be safer, people will spend less time on the site, they’ll click on less ads, they’ll make less money,” she said.

Like, they basically said, ‘Oh good, we made it through the election. There wasn’t riots. We can get rid of Civic Integrity now.’ Fast forward a couple months, we got the insurrection.

In a written response to CBS about Hagen’s accusations, Facebook claimed that it had taken every possible step to address harmful content, including banning hundreds of “militarized social movements” and “tens of thousands of QAnon pages, groups and accounts.”

The company said it also “aggressively worked with law enforcement, both before January 6 and in the days and weeks since, with the goal of ensuring that evidence linking the people responsible for January 6th to their crimes is available for prosecutors.”

Ultimately, the responsibility resides with those who broke the law, and the leaders who incited them. Facebook has taken extraordinary steps to address harmful content and we’ll continue to do our part.


Ever since the January 6 riot, social media platforms, including Facebook, have faced increased scrutiny from the Democrats for their alleged failure to prevent the protesters from organizing and storming the Capitol. On the other hand, Republicans have for years been accusing the openly liberal US tech giants of overzealous censorship and shadow-banning of conservative views.

However, in her call on lawmakers to finally put a leash on Facebook, Haugen chose to focus on the issue both camps could agree on – the said dangers social media poses to young minds.

Facebook has demonstrated they cannot act independently… It is subsidizing, it is paying for its profits with our safety. I’m hoping that this will have had a big enough impact on the world that they [the US federal government] get the fortitude and the motivation to actually go put those regulations into place.

China growth of 3% in the next decade is a ‘very good outcome’: IIF