CNN’s Sanjay Gupta goes on Joe Rogan’s show to turn him on to vaccines, gets grilled about his network’s ‘horse dewormer lies’ 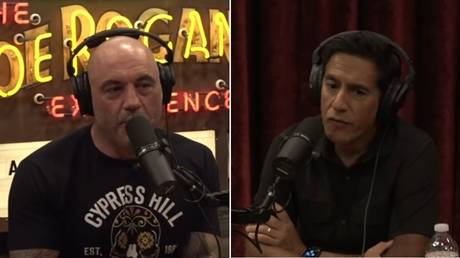 CNN’s row with Joe Rogan over his use of Covid-19 treatments took a twist on Wednesday when the network’s chief medical correspondent went on Rogan’s podcast and was confronted about the network’s ‘lies’.

Popular American podcaster Joe Rogan is a Covid vaccine skeptic and used an unproven therapeutic regimen when he contracted Covid-19 in late August. Among other things, he took the anti-parasitic drug ivermectin. CNN reported that he used “a horse dewormer,” which he insists is a lie, since he took the version of the drug for human use after it was prescribed by a doctor.

Also on rt.com
‘Do I have to sue CNN?’ Joe Rogan lashes out at liberal network for claiming he took ‘horse dewormer’ to fight Covid-19


On Wednesday, the podcast host had the opportunity to raise the issue with CNN’ top medical reporter, Sanjay Gupta, who was not able to defend his network’s ‘horse dewormer’ claims.

“They shouldn’t have said it was horse dewormer,” Gupta readily acknowledged, seemingly eager to change the topic. But Rogan persisted.

“Does it bother you that the news network you work for… outright lied about me taking horse dewormer?” he said.

“They should not have said that,” Gupta replied. He admitted he didn’t ask anyone at CNN about their coverage, and that he probably should have done so before appearing on Rogan’s show. He did not, however, agree with Rogan when he said CNN reported on his illness “with glee.”

Ivermectin has become a point of heated debate in what is seen by many as a ‘culture war’ surrounding Covid-19 and vaccines. Many people who are hesitant to be vaccinated for Covid-19 see the drug as a treatment or prophylactic for the disease, though so far there is no official medical evidence to support this.

The spike in demand for ivermectin reportedly caused shortages, and some people eager to take it tried the veterinary version, for which they were branded by many Covid vaccine enthusiasts as ‘antivax’ idiots taking a ‘horse dewormer’ for the coronavirus.

While this likely did little to change the minds of ivermectin users about coronavirus vaccines or to foster ‘national unity’, this type of coverage seems to have fans in the newsrooms, as evidenced by the swift spread of a fabricated story about ivermectin overdose victims overflowing the emergency rooms in an Oklahoma hospital, which could have been easily debunked from the start by a reasonably competent journalist.

Rogan was widely cheered by conservative-leaning people on Twitter for calling out CNN over its role in smearing ivermectin, and for how this episode explains why the public does not trust the mainstream media.

Incredible. Joe Rogan perfectly confronts Dr. Gupta:”You’re working for a news organization. If they’re lying about a comedian taking horse medication, what r they telling us about Russia?!?Do u understand that’s why people get concerned about the veracity of the news?”

Gupta went on ‘The Joe Rogan Experience’ – “into the lion’s den,” as he jokingly put it – with the goal of convincing him to take the vaccine. Rogan believes that people at high risk from the disease, like those over a certain age or with comorbidities, should definitely take the vaccine. But younger, healthy people, and especially children, may be better off without it, considering the rare cases of severe side effects from the vaccines and the lack of long-term research into their effects.

Gupta’s mission was apparently a failure, as he reported to his network, but the three-hour program had plenty of interesting discussions about Covid-19, vaccines, and other medical topics.

Rogan asked Gupta about why he changed his attitude to medical cannabis, which apparently won the CNN correspondent a great deal of respect from the show’s host.

They also had a lengthy debate over gain-of-function research on pathogens, and the possibility that Anthony Fauci, the chief medical adviser to the US president, may have a conflict of interest when it comes to this. Fauci is treated as a revered figure, someone beyond reproach, by news outlets like CNN among others.

Steelers WR JuJu Smith-Schuster may be done for season