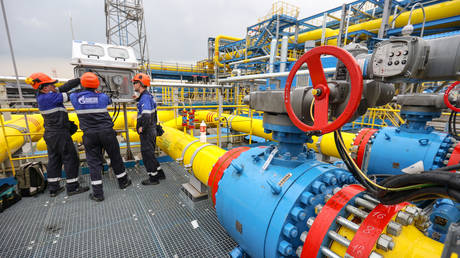 The price of natural gas in Europe dropped below $850 per 1,000 cubic meters for the first time since the end of September. Prices edged lower after Russia said it would start sending more gas to Europe in less than two weeks.

According to trading data from the Intercontinental Exchange (ICE), the price of December gas futures on the Dutch TTF index was trading at $844.90 per 1,000 cubic meters, or €70.135 per megawatt hour in household terms, marking a drop of 9.5%.  However, the benchmark remains almost five times higher than a year ago.

Also on rt.com
‘Nobody will freeze’: Russia will supply Europe with as much gas as it needs, says country’s energy committee

Gazprom boss Aleksey Miller confirmed that the company would start pumping gas into its storage units in Austria and Germany after November 8, by which time Russia’s domestic depots are expected to be full.

The announcement reversed soaring gas prices on the European markets that had previously reached unprecedented levels of nearly $2,000 per 1,000 cubic meters. The series of price spikes are mostly attributed to seasonal factors exacerbated by the reopening of European economies after Covid-related lockdowns.

Biden moves to remake the Fed