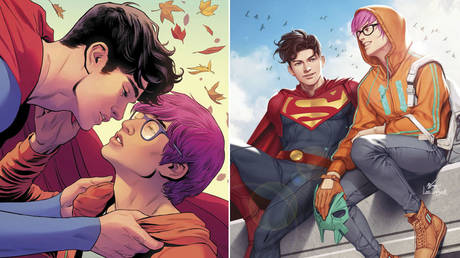 Former Superman actor Dean Cain criticized DC Comics’ decision to make the superhero’s son bisexual in a new story, accusing the publisher of “bandwagoning” and calling on them to make him fight for gay rights in Iran instead.

“They said it’s a bold new direction. I say they’re bandwagoning,” declared Cain – who played Superman in the 1993-1997 television show ‘Lois & Clark: The New Adventures of Superman’ – during an appearance on Fox News’ ‘Fox & Friends’ on Tuesday.

So I think @RealDeanCain knocks it out if the park in this interview 💯 There are PLENTY of other issues that would be considered brave- this is just jumping on a bandwagon for clicks and virtue signal points. pic.twitter.com/8gl2ryv4PD

Noting that other superheroes and their sidekicks have also been portrayed as gay or bisexual in recent years, the actor argued, “I don’t think it’s bold or brave or some crazy new direction… If they had done this 20 years ago, perhaps that would have been bold and brave.”

Brave would be having him fighting for the rights of gay people in Iran where they’ll throw you off a building for the offense of being gay.


Cain referenced a recent Superman plot where the superhero helped stop the deportation of refugees in Metropolis and questioned why DC Comics doesn’t make Superman “fight the injustices that created the refugees whose deportation he’s protesting.”

“That would be brave. I’d read that,” Cain said.

The actor offered a list of other suggestions, including fighting against government corruption or for the rights of women across the world

“Plenty of things to fight against. Human trafficking. Real actual slavery going on,” he said, adding that he “would read that comic,” before concluding, “This one, I don’t think I’ll be reading. I can just watch CNN or MSNBC to get this information.”

After the comic book news site Comic Book Resources (CBR) called for a non-white person to be cast as Superman in 2019, Cain – who is partially of Japanese descent – responded, “You’re about 25 years too late.”

DC Comics announced the move this week, saying in a statement that Jon Kent, son of Clark Kent and Lois Lane, will come out as bisexual. “Superman’s symbol has always stood for hope, for truth, and for justice,” writer Tom Taylor said in a statement. “Today, that symbol represents something more. Today, more people can see themselves in the most powerful superhero in comics.”

A new report shows how climate change is hurting your health : NPR