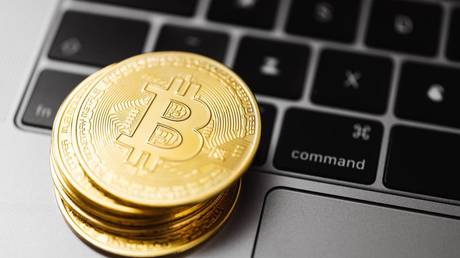 The world’s top cryptocurrency continues to rise, as bitcoin price surpasses $58,000 per coin, marking a nearly 26% surge for the month to date. Experts warn, however, that the sharp increase may lead to a sell-off.

Bitcoin was trading around $58,000 as of 6:00 GMT on Thursday, up about 5% from the previous close. It dipped below $55,000 briefly on Wednesday, after trading in a tight range over the past few days.

Also on rt.com
Nearly 90% of bitcoin have been mined, and new coin issue unlikely after 2140 – analysts


Some analysts claim the current rally is driven by increased speculation around the possibility of a bitcoin exchange-traded fund (ETF), which could spring up if greenlighted by the US Securities and Exchange Commission (SEC) as early as this week. However, many are skeptical whether the approval will have a beneficial effect on bitcoin’s price.

Crypto analysts say the extreme buying in the market could mean the rally may soon run out of steam. According to the Fear & Greed Index, a tool used by investors to gauge whether the market is fairly priced, bitcoin entered ‘extreme greed’ territory last week, and is at the highest level since early September, which preceded a sharp sell-off and may signify another one approaching.


The cryptocurrency is still about 8% below its all-time high of around $65,000 in April, but has nearly doubled in price since the July low of under $30,000.

States that do not play by EU rules do not get ‘benefits of Europe’, France tells Poland amid row over law primacy — RT World News