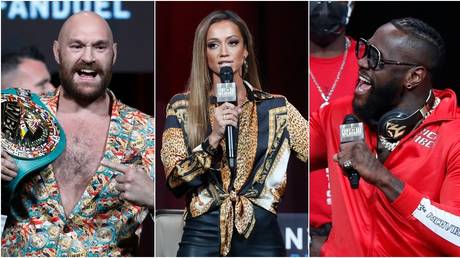 Veteran boxing promoter Bob Arum accused TV host Kate Abdo of endangering the trilogy fight between Tyson Fury and Deontay Wilder by calling the pair up for a face-off at a tense press conference in Las Vegas.

Fury and Wilder will contest the latest and potentially last chapter in one of heavyweight boxing’s most intriguing rivalries of a generation when they meet for the third time at the T-Mobile Arena on Saturday night.

The Brit is seeking to retain the WBC title he snatched from his American opponent with a seven-round demolition in February of 2020, with the pair having fought to a draw in a thrilling first encounter at the end of 2018.

Sitting across the stage from Wilder at an expletive-laden press conference on Wednesday, the undefeated Fury vowed that he would once again dismantle the Bronze Bomber this weekend.

“Deep down he knows that he lost and he’ll lose again. He lost the first time and he lost the second time, and he’s going to lose the third time,” said the 33-year-old Brit, who was dressed in a suit adorned with images of his WBC and Ring Magazine titles.

Continuing his goading as he walked the stage, the Gypsy King claimed that Wilder had become boxing’s laughing stock for the host of excuses he trotted out in the wake of his last defeat.

“You’re in denial and you’re getting knocked out. Do yourself a favor and retire from boxing,” taunted Fury.

“Your legacy is in bit. Even all your excuses have been destroyed. Everybody’s laughing at you like the little weak piece of sh*t that you really are.”

Following his defeat to Fury last year, Wilder reeled off a litany of excuses which included his ring-walk suit being too heavy and Fury using tampered gloves.

“I knocked you out dosser. Jay Deas (one of Wilder’s team) – was he in on it too? He was in the room when I put the gloves on. I don’t need to defend titles, that’s for dossers like you,” chided Fury.

“You have come dressed like a tramp, dressed like me on a training day. You will only be remembered for getting knocked out by me. You are a loser and are being trained by a loser, so that makes two losers.”

Wilder, 35, largely remained placid during the conference as Fury roamed the stage, emerging with his headphones on and often playing with his phone.

The Alabama fighter claimed he was unperturbed by the threats from the 6ft 9in Brit.

“I’m good. I don’t have to fight another day in my life. I’m good – can you say the same thing?” said the American.

But confusion reigned as the tense proceedings came to a close when host Abdo called the pair up for a traditional face-off, only for the idea to be quickly shouted down from Fury’s co-promoter Arum, with fears that tempers could flare between the two heavyweights.

“No, I apologize, we’re not going to do it, no. Bob Arum says no,” said Abdo abruptly.

Later, Arum ranted at the 40-year-presenter, accusing her of bias towards Wilder and potentially jeopardizing the fight.

“They bring this woman in from the UK. She’s slanting all the press conference to Wilder… I don’t give a damn, but it’s obvious that’s what she was doing,” raged the 89-year-old Top Rank boss.

“She knew that the understanding was no face-off… We said no face-off. What does she say? ‘Now we’re going to do a face-off’.

“F*ck her and f*ck them. There was no face-off and we saved the fight.”

Abdo, who has earned a reputation as a popular presenter in the UK and US with boxing and football shows, responded to the row by tweeting her side of the situation.

“I was doing what we the broadcaster believed was agreed upon,” wrote the Manchester-born broadcaster.

“But that’s kind of unimportant now. I have nothing but respect for Bob Arum and the empire he has created. I understand what he means to boxing and what this sport owes him.

“I think the language in this interview was entirely inappropriate.

“Of course it’s disappointing to be disrespected by someone I disrespect. But that’s life, not everyone will give you the respect you deserve.”

Fury and Wilder had both appeared ready to stare each other down, but the Brit later admitted it might have been a bad idea.

“Frank Warren must have thought I was going to chin him,” the Manchester fighter was quoted as saying, referring to his UK co-promoter.

“I wouldn’t have chinned him, I’d have just nutted the c*nt. Like that!”


Wilder’s defeat to Fury in their last meeting remains the sole loss the American has suffered in his 44-fight professional career.

The pair drew a classic first encounter in December of 2018 when Fury somehow rose from the canvas to beat the beat the count in a pulsating final round.

The last time Wilder and Fury met was far more one-sided, as the American’s team were forced to throw in the towel in the seventh round after their man was outboxed across seven rounds.

Plans for trilogy fight appeared to have fallen through several times, prompting hopes that Fury would sidestep Wilder in place of a lucrative Battle of Britain title unification showdown with former heavyweight world champion Anthony Joshua.

However, an arbitrator deemed in the summer that the Gypsy King must meet Wilder next, rather than face his fellow Brit.

Joshua has since lost his titles to Ukrainian challenger Oleksandr Usyk – a fate which Fury will be aiming to avoid this weekend.