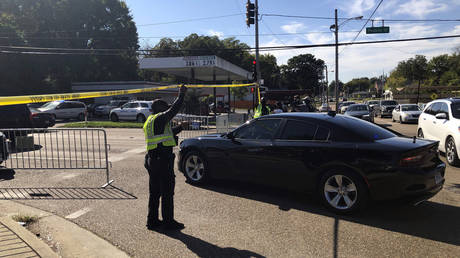 A shooting at a US Postal Service office in Memphis, Tennessee left three people dead, with the gunman dying from a self-inflicted wound after killing two fellow employees, the FBI and USPS have confirmed.

The shooting unfolded at a USPS facility in the Orange Mound neighborhood on Tuesday afternoon, and was first reported by the Memphis Police Department just before 3pm local time. While the PD initially offered few details, it noted that the scene had been “secured” and that there were “no active threats.”

Memphis Police Officers are on the scene of a shooting at 2801 Park Ave in support of the FBI and USPS.The Memphis Police Dept. is assisting with securing the perimeter and the scene.There are no active threats. The scene is secured.

USPS representative Susan Link later confirmed during a press conference that three employees were killed in the shooting, while a spokesperson for the FBI, Lisa-Anne Culp, added that the gunman was among the fatalities, and had shot himself after the rampage.

One of the victims was identified as James Wilson by a relative reached by local media. “He was a good man. An outstanding man. The best man you’d ever want to be around,” said Wilson’s cousin, Roxanne Rogers.

A local Fox affiliate also reportedly spoke to a family member of another victim, who was named as Demetria Dortch, 37. The identity of the third person killed, presumably the shooter, is currently unknown.

The postal service said it was “saddened” by the deadly shooting in a statement emailed to local media, adding “Our thoughts are with the family members, friends and coworkers of the individuals involved” and that the USPS would offer support to all affected.

The FBI is participating in the investigation into the shooting, and said it was taking a role, in part, because USPS facilities are federal buildings, where the bureau has jurisdiction. The motive behind the incident remains unclear, and both law enforcement and the postal service have given few other details on exactly what took place.

Also on rt.com
Gunman down after killing 1, injuring 12 in shooting at supermarket on outskirts of Memphis, Tennessee