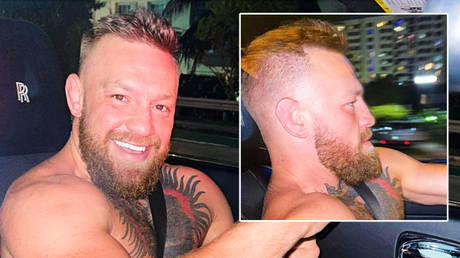 MMA megastar Conor McGregor has boasted that he is wealthier than the entire UFC roster while smoking topless in a luxury car.

Serial braggart McGregor, who is estimated to be worth around $200 million despite losing three of his last four UFC fights, portrayed himself grinning and puffing at what appeared to be a cigar while he took one of his array of cars for a spin at night.

The 33-year-old has repeatedly produced announcements that have verged on the indecipherable during his comeback from a gruesome leg injury, sustained during his knockout defeat to Dustin Poirier that completed their trilogy at UFC 264 in July.

Ever-keen to show off his muscles, the attention-loving lightweight swiftly produced a series of portraits of himself carrying out a chest session in a gym.

Grimacing as he posed while wearing a shirt belonging to Irish rugby team Leinster, McGregor added: “Tonight’s strength work goes out to first responders all over the world.”

McGregor’s mother, Margaret, was then seen in a convertible white car appearing to say that she had “plenty of money” before laughing: “It’s great to be rich.”

“It’s not even funny, Conor – not even funny,” responded a voice off camera, likely to have been McGregor’s fiancee, Dee Devlin. “Love you, ‘Mags’. Safe home.”

‘The Notorious’ has appeared eager to demonstrate his lifestyle during a busy few days broadcasting to his millions of followers.

At the weekend, McGregor showed himself DJing while yet again promoting the whiskey brand that has beefed up his vast wealth.

He then said that he is “eating the weights” as he continues a recovery that could see him return to action in the UFC next year.

By then, it is likely to have been more than two years since the victory over Donald Cerrone that is his only MMA win since November 2016, including a submission defeat against Khabib Nurmagomedov at UFC 229 in October 2018.

Gay Afghan hiding from the Taliban: These WhatsApp messages show his terror