Putin 2024? Russian president refuses to reveal if he will run for office again, but warns talk of succession is ‘destabilizing’ 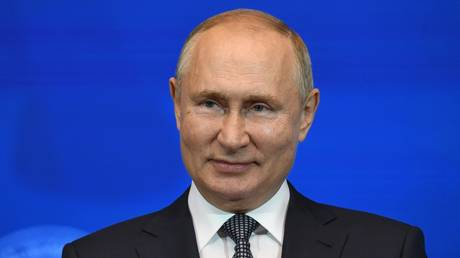 Russian President Vladimir Putin has made no decisions about whether he might stand again for his country’s top job after his current term expires in 2024, and speculation about a successor could hinder the work of the government.

That’s according to Putin himself, who told US TV channel CNBC on Wednesday that he has not yet decided whether or not he will run for office again, explaining that starting a race to replace him could be detrimental to the government’s work.

“No, I prefer not to answer such questions, this is my traditional answer,” the president said. “There is still a lot of time before the next elections. Conversations on this topic destabilize the situation. The situation must be calm and stable so that all government bodies and all state structures work confidently and calmly look to the future.”


Putint also noted that, due to changes in the constitution, he would be able to run again should he decide to. “Yes, the Constitution allows me to run for the next term, but no decisions have been made on this score yet,” he said.

Putin was inaugurated as president of Russia in 2000 and has since served four terms in the role, with the country, and its relations with foreign nations, changing drastically over that period.

Also on rt.com
Nearly half of Russians want Putin to stay on as President after 2024, while one in four worry about ‘Cult of Personality’ – poll


In March, Russia’s State Duma passed a law that would allow him to run for a fifth term, and even hold office until 2036, when he would be 84 years old. Aleksey Mukhin, the head of the Center for Political Information, said last year that the move looks like a “very delicate trolling” of Russia’s Western partners, adding that Putin does not have any real intention of remaining in power for more terms, but that the thought of it will keep the West “on its toes.”

On Monday, Moscow’s Levada Center pollster released new research findings, having questioned Russians across the country. Almost half of Russians argued that they would like to see Putin stay on in the presidency after 2024, when his current term is set to expire. Forty-two percent said they would not, the highest number since 2013. The Levada Center is registered as a ‘foreign agent’ by Moscow’s Ministry of Justice over links to overseas funding.


In the Russian legislative elections held in September, the ruling party, United Russia, officially received close to 50% of all votes cast, while sweeping the overwhelming majority of constituencies.