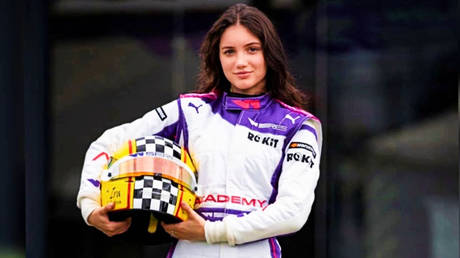 Racing prodigy Ira Sidorkova feels she has missed the chance to race and earn prize money after being denied a US visa despite support from a Congressman – because officials were not convinced she would stay temporarily, she says.

The 18-year-old, who is a former Russian Circuit Racing Series national junior champion and commands a huge social media following, has admitted her “race is over” after she claims she was turned down following a visit to the US Embassy in Oman.

One of the rising stars of all-women’s racing and the F3 Asian Championships, Sidorkova says officials from Formula One, the W Series she competes for and Michael McCaul, the multi-millionaire Republican representative from Texas, tried to resolve her issue “until the last moment”, thanking them with a heart emoji on Instagram.

“The State Department is not sure “that my visit to the United States will be temporary,” frustrated Sidorkova told her vast army of fans.

“This is the first time in my life and racing career [that has happened]. I was deprived of races and the opportunity to fight for a good place and prize money, which I planned to invest in my training.

“I was denied a visa to the United States although I have a status of a National Interests Exemption as a professional athlete.”

Sidorkova had been due to race in Austin, but now fears her 2021 season has ground to a halt.

Visa issues have not been uncommon for Russian athletes visiting the US. In 2019, after tennis star Svetlana Kuznetsova was denied the chance to compete at a tournament, the Russian Embassy in Washington said it was “outraged by the continuing practice of keeping our athletes from participating in major competitions in the US” and urged the country’s State Department to end its “discriminatory visa-issuing policy”.

Athletes have continued to frequently face problems, although Sidorkova issued a defiant note in response to her experience.

“I just want to say once again: I am a racer from Russia and I am proud of it,” she declared.

“I will continue, whatever it takes. First I was refused by US embassy at an interview, and later nothing worked out.”

The hot prospect thanked the W Series, Formula One and McCaul again for “trying to make it work somehow.”

“I appreciate this help a lot and I’m very thankful for that,” she added.

Also on rt.com
‘Quite a surprise!’: Russian racing prodigy Sidorkova beams as men’s magazine heralds her among country’s sexiest sirens

Global TB deaths are rising — and COVID gets the blame