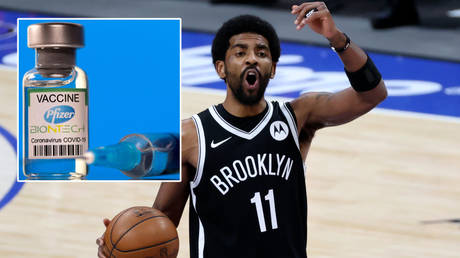 Seven-time all-star Kyrie Irving will become the most high-profile NBA absentee as a result of choosing not to receive a Covid vaccine, the Brooklyn Nets have announced – and fans have been split again by the dramatic development.

The franchise’s general manager, Sean Marks, stunned fans by announcing that the star will not be involved in the foreseeable future because of his decision on receiving a jab.

Alhough the Nets aren’t allowed by law to reveal whether or not Irving has been vaccinated, the news strongly indicates he has not managed to meet New York’s protocol requirements.

“If he was vaccinated, we wouldn’t be having this discussion. I think that’s pretty clear,” Marks said.

Breaking: Nets GM Sean Marks announced that Kyrie Irving will not play or practice with the team until he is “eligible to be a full participant.” pic.twitter.com/qMLRNfwk39

Compliance requires proof of at least one shot to enter indoor gyms including the Barclays Center, where the Nets play their home games, and Madison Square Garden, which hosts the New York Knicks.

“Kyrie has made a personal choice and we respect his individual right to choose,” Marks said in a statement.

“Currently, the choice restricts his ability to be a full-time member of the team, and we will not permit any member of our team to participate with part-time availability.

I stand with Kyrie Irving. No one should be forcing people into medical treatments against their will, especially a vaccine w/ no long-term safety data. This is no longer a health issue, it’s about liberty.

THIS IS NOT FAIR! THEY ARE TAKING HIS FREEDOMS AWAY!

“It is imperative that we continue to build chemistry as a team and remain true to our long-established values of togetherness and sacrifice.

“Our championship goals for the season have not changed and, to achieve these goals, each member of our organization must pull in the same direction.

“We are excited for the start of the season and look forward to a successful campaign that will make the borough of Brooklyn proud.”

Marks also revealed that the decision to drop Irving had been made by himself and owner Joe Tsai, with the 29-year-old forced to forfeit his salary for the home games he will miss.

The Nets and Irving’s decisions have split opinion on the reliably divisive topic of vaccines.

“Kyrie is going to retire,” one fan predicted. “Nobody should be forced to take the vaccine. Should be a choice.”

Easy to say that except the guy worked his whole life to play ball and now the rules are changed.

Oh damn, so you think he shouldn’t face consequences for choices he makes just because he played a game all of his life?

Addressing suggestions that Irving should put up and shut up, one pointed out: “Easy to say that, except the guy worked his whole life to play ball and now the rules are changed.”

Another protested: “This is not fair. They are taking his freedoms away.”

“He doesn’t have a right to play in the NBA,” said a reply to that viewpoint.