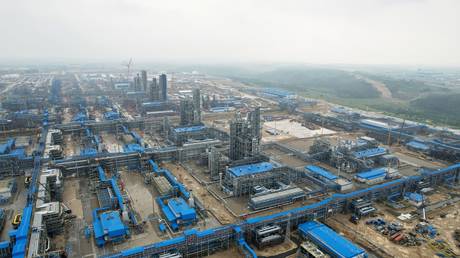 Russia is on course to set a new record for natural gas production in 2021, but plans to focus on domestic supplies during the upcoming winter, Deputy Prime Minister Alexander Novak said at the Russian Energy Week forum.

“As for production capacities, this year we will reach record volumes of gas production,” Novak stated. According to the minister, however, authorities will put domestic demand first and ensure that Russia’s internal gas market is well-stocked for the winter period.


This means producers will focus on filling up domestic underground gas storage facilities (UGS) with the process expected to be completed around the end of October, “depending on weather,” as Novak put it, before supplying additional volumes to Europe. At the same time, the minister noted that Russia is fully complying with its existing contract obligations for gas supplies to the EU and is ready to consider increasing deliveries, but no official applications for this have been submitted.

“Officially, no one has approached the Ministry of Energy or the government [regarding extra supplies]. Russia and in particular Gazprom, as the only exporter, fulfills its obligations under all contracts. If anyone needs it, Gazprom will consider supply options based on its production capacity, which it has,” the minister stated. The EU’s High Representative for Foreign Affairs and Security Policy Josep Borrell said this week that Europe needs Russian gas and may need more gas than had previously been agreed.

Also on rt.com
Gazprom raises forecast for gas export prices by over 10% in 2021


Gas prices in Europe have skyrocketed in recent weeks. The cost of November futures on the TTF hub in the Netherlands rose to $1,229.4 per thousand cubic meters on Thursday, or $119 per megawatt-hour in household terms. The overall price increase since the beginning of the day was about 7.6%.

According to Novak, Russia does not welcome high gas prices, as this pushes consumers toward alternative energy sources.

“There is inter-fuel competition, when prices for one type of energy increase, others are cheaper, the demand for them becomes greater… Therefore, we also see such risks, and the president said today that we are not interested in high prices. They must be competitive,” the minister said.


Novak also announced that Russia’s new Nord Stream 2 gas pipeline will be ready for gas deliveries in a matter of days.

“The construction of Nord Stream 2 has been completed. Commissioning and filling of the pipeline with the required technological amount of gas is underway. And I believe that it will be ready for operation in the coming days,” Novak said, adding that everything now depends on the European regulator.

Commercial gas supplies via Nord Stream 2 may begin immediately after obtaining permission for deliveries, Novak stressed, adding that supplies also depend on applications from European consumers. On October 4, the Danish Energy Agency announced that the pipeline’s European operator Nord Stream 2 AG had fulfilled all the conditions for putting Nord Stream 2 into operation.