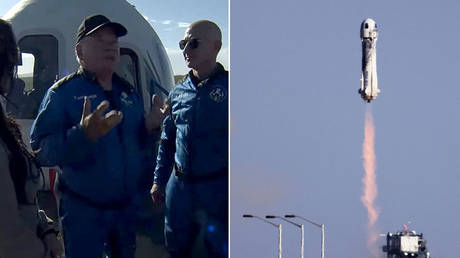 Hollywood star William Shatner, who played Captain Kirk in popular science-fiction series ‘Star Trek’, became the oldest person in the world to visit space on Wednesday, as a Blue Origin rocket took him over 100km above the Earth.

Before launch on Wednesday, Shatner said, “There is this mystique of being in space and that much closer to the stars and being weightless.”

“I shall be entranced by the view of space,” he added. “I want to look at that orb and appreciate its beauty and its tenacity.”

I do not know what I may appear to the world, but to myself I seem to have been only like a boy playing on the seashore, diverting myself in now & then finding a smoother pebble or a prettier shell than ordinary, whilst the great ocean of truth lay all undiscovered before me.🚀 pic.twitter.com/ZY2Ka8ij7z

In 2014, NASA honored Shatner with its Distinguished Public Service medal – the most prestigious available for non-government workers – for encouraging young people to study science and “inspiring generations of explorers, including many of the astronauts and engineers who are a part of NASA today.”

The US space agency wished Shatner well for his space flight in a tweet on Wednesday, referencing a line of dialogue from 1982’s ‘Star Trek II: The Wrath of Khan.’

Shatner played ‘Star Trek’ character Captain James T. Kirk in the 1960s original series, and soon became a science-fiction icon. He has continued to work in his old age, and currently hosts a science show ‘I Don’t Understand,’ airing on RT America.