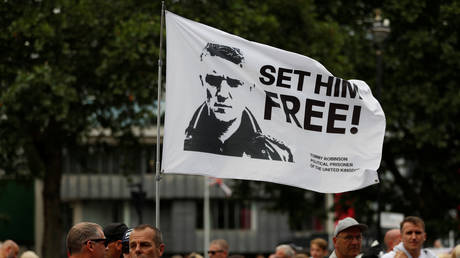 Right-wing rabble-rouser Tommy Robinson, founder of the English Defense League, faces an anti-stalking order after showing up at a journalist’s house late at night “screaming” and demanding that she kill a story.

Robinson, whose real name is Stephen Yaxley-Lennon, was given the ban in court on Wednesday. The court heard that he showed up at the home of The Independent journalist Lizzie Dearden late at night, “screaming and agitated” in his efforts to stop her from publishing an article about him.

Robinson “continues to pose a risk to the complainant’s physical and psychological wellbeing,” deputy chief magistrate Tan Ikram observed, dismissing the activist as not a “credible witness.” Robinson had “crossed the line between mere harassment and acts associated with stalking” when he threatened to return to her home multiple times, the judge continued, according to The Independent.


The right-wing activist didn’t just creep Dearden out by showing up at her home after 10pm – he had previously hired a private investigator to dig through her personal life. Robinson’s abuse appeared to be a response to an article Dearden was about to publish that accused him of ‘misappropriating’ fans’ donations.

While Robinson insisted he was just trying to set the record straight, his explanation that he just wanted to have his response to Dearden’s claims recorded on film did not sway the judge. Ikram countered that Robinson’s “intimidating behavior late at night” and “screaming, shouting and swearing outside the address” indicated he had more than a peaceful interview in mind.

The anti-immigration activist appeared to have learned of the article through his solicitors, whom Dearden had emailed for comment.

In a previous hearing, it was revealed that Robinson had first tried to coax Dearden and her partner outside to “come down and talk,” but was turned away and subsequently chased off by the building’s security guard.


Under the stalking order, Robinson is forbidden to contact Dearden or her partner Samuel Partridge indirectly or directly, and from visiting anywhere they live or work. He is also forbidden from publishing anything concerning Dearden or Patridge, online, in social media, in print, or otherwise. However, he will be allowed to make ‘legitimate comment’ on future articles.

Robinson has something of a history with Dearden, having posted about her online in early 2018, unleashing a torrent of abuse. He also made “unsubstantiated allegations” about her partner, claiming he was a pedophile.