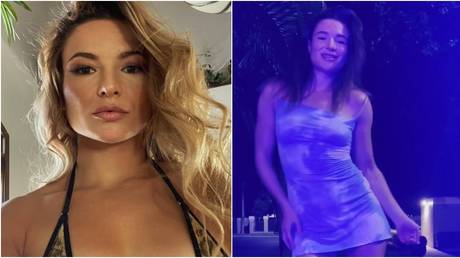 UFC fighter Maryna ‘Iron Lady’ Moroz has sarcastically responded to social media trolls who took issue with some of her racy Instagram output.

Repeated efforts to set up a next outing for the Ukrainian – who owns a 10-3 record – have fallen by the wayside, most recently when a bout with Luana Carolina fell through in October.

But to supplement her scarce fighting income, Moroz maintains an OnlyFans-style personal website where she shares revealing photos with fans – also occasionally giving a teaser to her 80,000 Instagram followers.

It was one such video where she writhed for the camera dressed in high heels and a miniskirt which earned criticism from some observers.

“Weekend is fun, how did you relax?” asked Moroz in the caption to the clip – to which one fan simply reacted with a ‘nauseated face’ emoji.

In response Moroz shared ‘clapping’ and ‘cash’ emojis, signaling that she was unperturbed by the attempted trolling.

“More [comments] I like when Insta pays for stupid comments,” wrote the fighter, indicating that more interactions would do wonders for her engagement and income, no matter how negative.

It’s not the first time the Miami-based Moroz has stormed the comments to defend herself.

When a fan questioned why her fight with Carolina fell through last month, she shot back: “Are you stupid I did not refuse [to fight], I am healthy and continue to train.”

Also on rt.com
‘Are you stupid?’ Ukrainian UFC star Moroz rows with fan after latest bout falls through for fighter with sideline in racy photos


One opponent desperate to take on Moroz is fellow UFC flyweight Mariya Agapova of Kazakhstan.

The pair previously trained together in the US before a falling out in which Moroz suggested Agapova had struggled with drug issues and erratic behavior.

“She’s jealous and sneaky. She’s trying to destroy my career,” fumed Agapova after her impressive performance in her victory over Sabina Mazo in Las Vegas last month.

“I lost sponsorship because of her interview and got into really big trouble situation, I’d like to punish this b*tch because she’s trying to destroy my career. I want to smash her.”