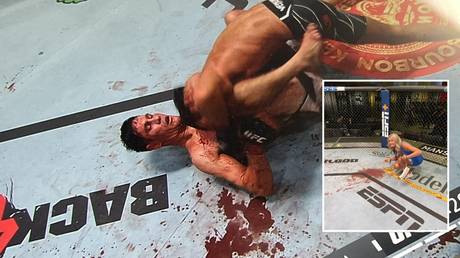 Damon Jackson’s fight at Saturday night’s UFC event certainly wasn’t one for the squeamish after a MASSIVE cut was opened up on his head, causing blood to pool on the canvas – with the American winning the fight soon after.

Jackson was cruising to what looked certain to be a unanimous decision win against Charles Rosa after dominating the opening two rounds with his suffocating grappling.

That soon changed in the third, however, after a desperate Rosa connected flush with a spinning elbow, opening a inches-long cut above Jackson’s right eye.

Blood quickly began streaming from the area, prompting the concern of the cage-side doctor who briefly examined the 33-year-old to determine if he was capable of continuing.

But with the Octagon now resembling a bloodbath, Jackson was granted permission to continue and secured the win on the judges’ scorecards when the 15-minute time limit expired.

After victory was secured, Jackson took some time on the microphone to note how quickly the fight’s momentum took a swing.

“I didn’t really feel it. It didn’t hurt, but when I looked down I saw like, ‘It’s really pouring out,’” he said in his post-fight interview.

“I felt like I was in control. I was hoping to hold him down a little better and get some more ground and pound. I wasn’t quite sure how the judges would see it.”

3 fights in and we have a mess in Las Vegas The spillage doesn’t slow down Damon Jackson. Dominant win from the Leach. UFC Fight Night: Dern v. Rodriguez pic.twitter.com/kgBJLf4ucp

The reaction on the broadcast, meanwhile, was perhaps a little less considered.

“You can smell the blood from here,” said commentator Paul Felder. “My God.”

“I love it. LOVE IT,” agreed his broadcast colleague Jon Anik.

The reaction of the UFC team was matched on social media, with many remarking on how the gash was among the worst cuts they can remember witnessing in mixed martial arts.

Nice of his opponent to try stop the bleeding by cutting off the circulation with a choke, proper sportsmanship

“Nice of his opponent to try stop the bleeding by cutting off the circulation with a choke, proper sportsmanship,” joked one fan.

“Damon Jackson sporting a cut worthy of Halloween. Yikes it is bad,” added a second.