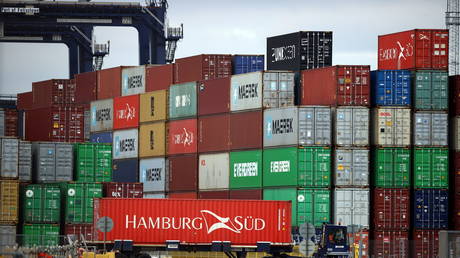 Tory Party co-chair Oliver Dowden said on Wednesday that the backlog at the UK port of Felixstowe is “improving” after shipping companies complained the ongoing HGV driver shortage meant they couldn’t land containers.

Speaking to Sky News, Dowden accepted that the country is currently facing a “challenging problem” due to the shortage of HGV drivers, but sought to reassure citizens that there is no need to start panic buying ahead of Christmas, as the gridlock is “improving.”

Dowden’s remarks came after shipping giant Maersk stated that it had been forced to reroute vessels from Felixstowe to other European ports due to the number of containers stuck at the port following the recent supply chain crisis.

Speaking to BBC’s Radio 5 Live, Maersk’s head of global ocean network Lars Mikael Jensen said that a number of the company’s 20,000 container-bearing ships were stuck waiting for between four to seven days outside Felixstowe. Instead of “wasting time waiting” any longer, Maersk diverted the vessels to other stops.

The container backlog at Felixstowe has been growing for the past two weeks, limiting the number of vessels able to dock at one point to one in three, compared with other European ports. It comes amid logistical problems across the UK that have seen fuel stations run dry and shop shelves empty, as deliveries have been hampered by the shortage of HGV lorry drivers.


Industry experts have estimated that there is currently a shortage of around 100,000 delivery drivers in the UK, forcing the government to recently introduce temporary measures to plug labour issues, offering temporary visas to foreign workers and drafting in the military to transport goods.

Felixstowe is crucial to the UK, handling around 40% of container traffic arriving into the country, meaning that current disruptions at the port could hit the crucial import pre-Christmas delivery period.

Here’s a look at the future of digital mortgage closings